SMT, THT, super thin, high brightness, reverse, transparent, milky and many other LEDs. Here are some basic tricks to help you find your way around the wide range of LEDs easily and quickly. 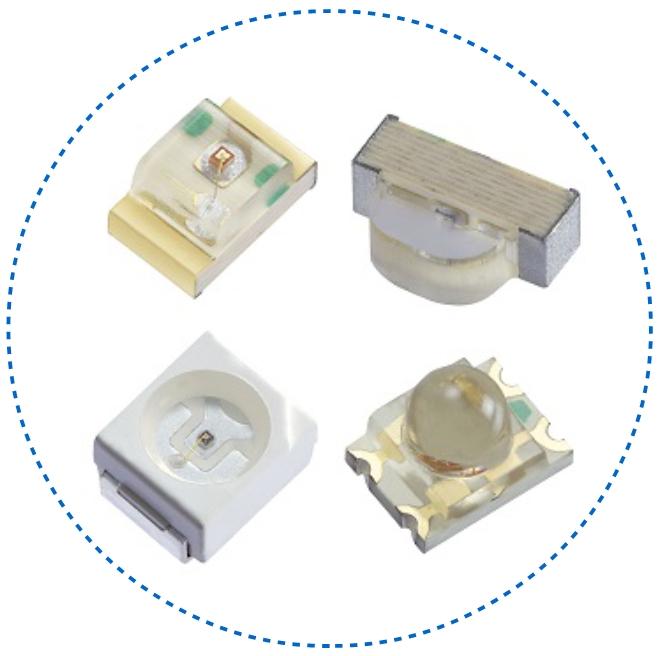 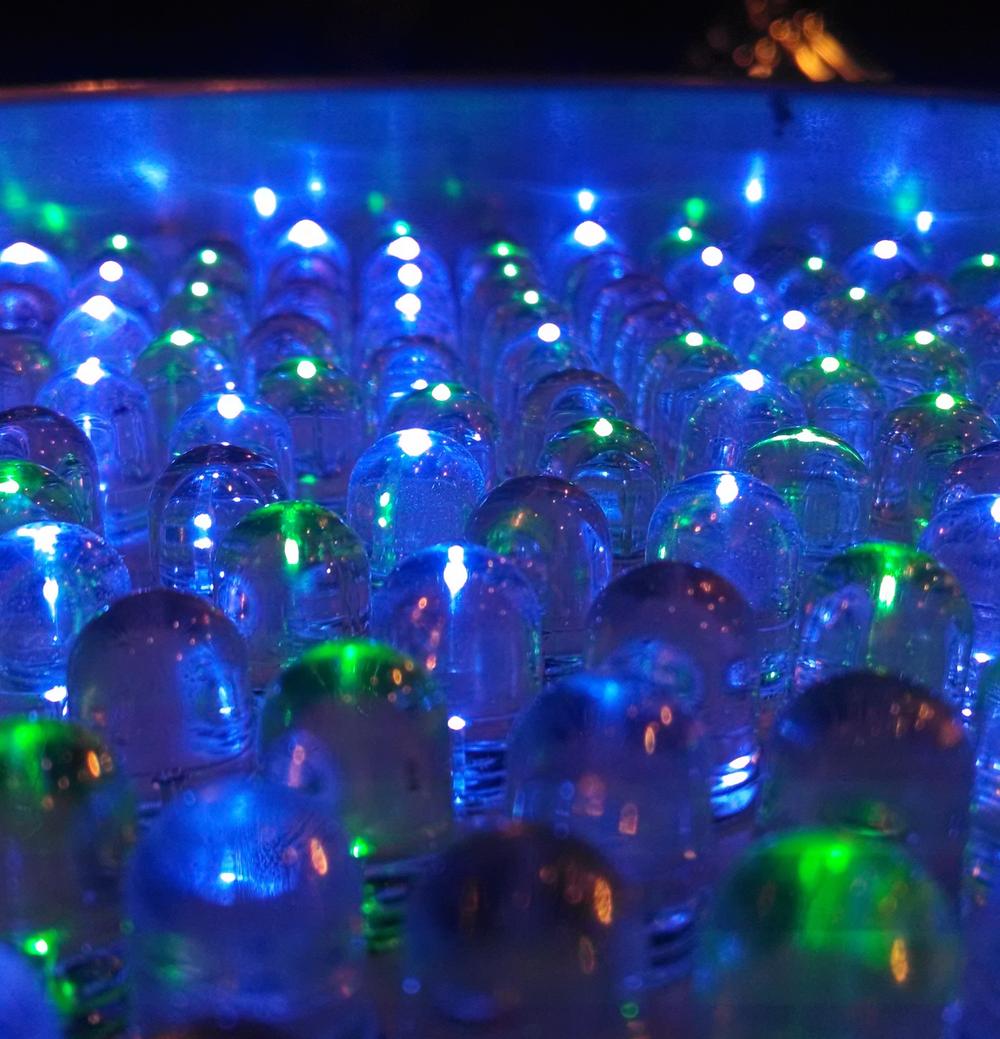 We have summarized the basic criteria for selecting LEDs that are good to know, whether you are facing the selection of a suitable LED or you are only interested in them in general, for the sake of interest.

Although the LED is quite a simple component, at first sight, it is still good to consider several parameters to achieve long-term reliability in your application.

In particular, the design of industrial equipment requires careful consideration of all aspects.

In general, if the SMT version is acceptable in terms of LED visibility and its function in the device, then it is certainly easier and more convenient to use this type of LEDs, both because of a simple automated mounting and reflow soldering.

On the other hand, classic LEDs with wire leads (THT) still have their stable place, as it is a relatively simple and inexpensive solution to place a signal element, e.g. on the front panel, without the need for additional light guides, etc. In this case, the different length spacers for the LEDs can significantly help with the assembly and can ensure a defined constant position of the LEDs. 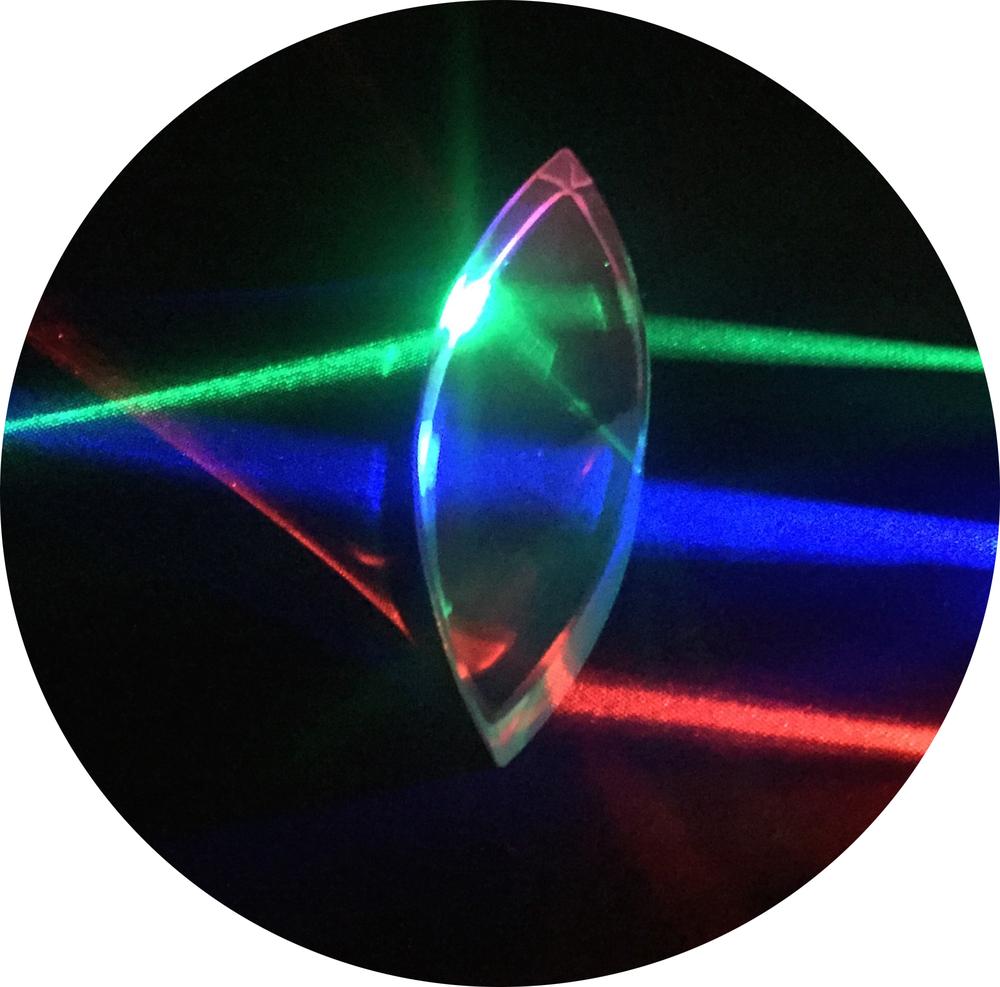 The choice of colour is typically a subjective matter. Most people probably associate the green colour of the indicator with the OK status and the red one with the error status.

In general, however, assigning colours to a state is solely at your own discretion. The wavelength of the emitted light is the best indicator of the true colour of the LED.

We usually find 2 data under the "Wavelength" parameter:

Beware of colour labelling by different manufacturers (red vs orange)

We can find a wide range of wavelengths under the basic names of colours such as green, red, yellow, orange, etc. When making a specific selection, it is necessary to focus on the "lambda" parameter rather than only on the general classification into the colour category.

Also, manufacturers do not have unified boundaries from which they indicate a given colour. So, it easily happens that, e.g. LEDs with a wavelength of about 600 nm are indicated by some producers as orange and others as red. Similarly, green was often green with a slight yellow tinge. Only later did the so-called "True green" types with a shorter wavelength appeared on the market, the colour of which is "purer" green or, from a photographic point of view, it is cooler green (closer to the blue end of the spectrum).

This is essential information about the "brightness" of a given LED at a certain current. Usually, the brightness in mcd (millicandelas) or the luminous flux in lm (lumens) is given. The brightness in the mcd tells more about how bright the LED will appear when viewed perpendicular to the LED. The luminous flux speaks much more precisely about the total light output that the LED emits.

If we compare two LEDs with the same chip but with different optics, then the LED with a narrower beam angle will have significantly higher brightness, as the luminous flux in the main axis of radiation increases significantly. In practice, however, this is not always an advantage, as such LEDs appear significantly darker when viewed from angles.

As mentioned above, this parameter has a significant effect on the direction of luminous flux.

SMT LEDs without optics usually have an extensive radiation pattern, sometimes approaching almost to a theoretical maximum of 180°.

On the other hand, THT LEDs with a classic lens on top, as well as SMT LEDs with a dome, have a significantly narrower characteristic. 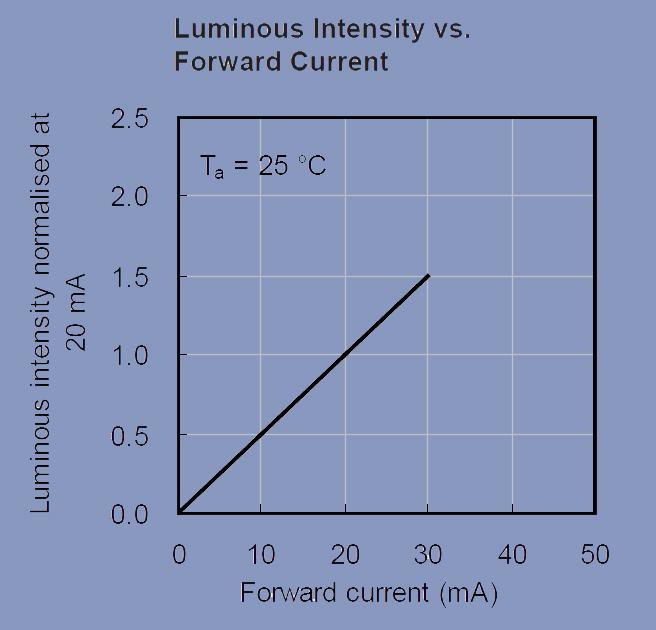 The maximum data can be easily found in the technical datasheet. The minimum current is usually not defined because the small current does not "harm" LEDs. For example, a classic 3mm leaded LED with Imax 20-30mA can also be operated at 1mA or even less. We, therefore, take advantage of the fact that the luminous flux of the LEDs is almost linearly dependent on the current.

Reducing the current saves the overall consumption of the device. It is often essential, as modern LEDs usually have a significantly higher brightness at 10-20mA than is necessary for a particular application. At the same time, this reduces the thermal stress on the LED and prolongs its service life. Renowned manufacturers usually also mention a graph of the dependence of the brightness of specific LEDs on the current in the technical sheets. 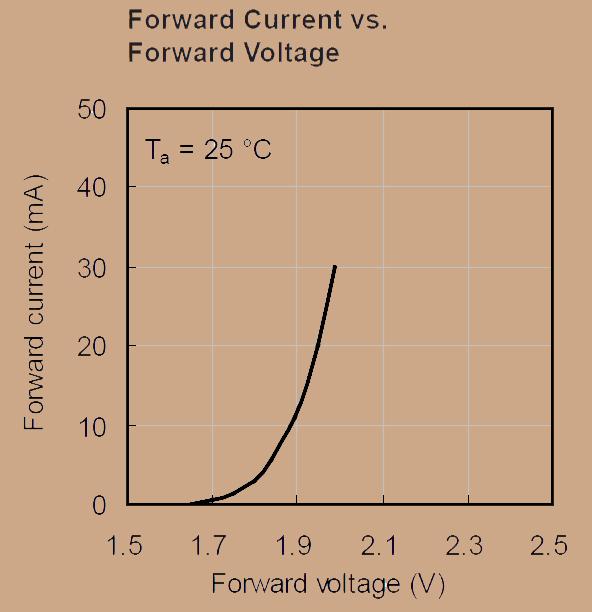 6. Voltage in a forward direction - VF

The production technology defines this parameter. Classic LEDs, depending on the colour, have VF 1.2-1.8V. Newer and more efficient types usually have this voltage higher.

You will probably be interested in the value of VF even if you are limited by voltage, e.g. when powering the device only at 3V. 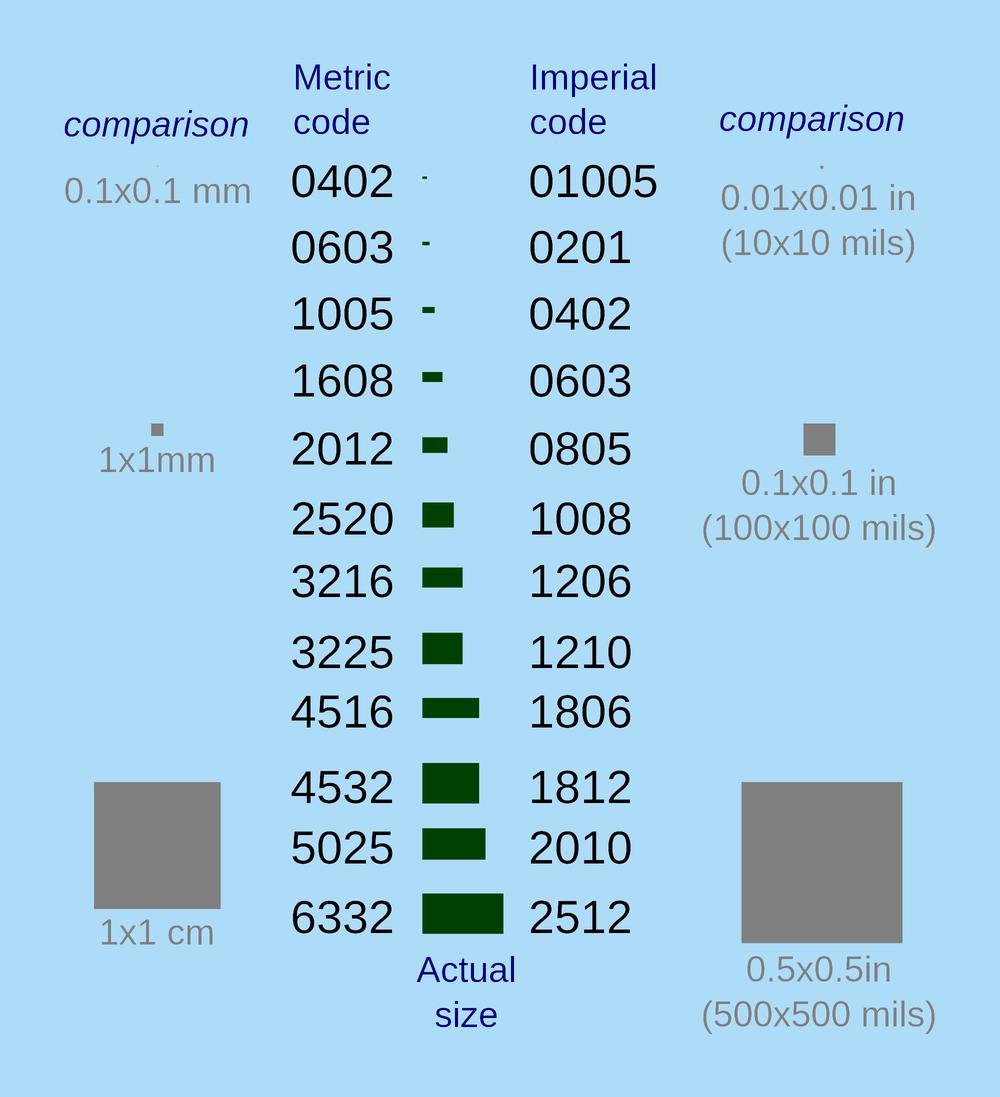 From a practical point of view, it is more advantageous to use relatively large housings such as e.g. 1206 or 0805, as handling them is easier and also automatic or manual mounting in prototypes is problem-free.

Nowadays, e.g. also LEDs with a size of 0.2*0.1mm and a height of only 0.1mm are available. For ordinary projects, however, this may not be the best solution, as this LED is really extremely small and looks subjectively very "spot-sized".

Of course, for space-critical applications, it can be a great benefit.

When choosing a THT LED, we usually have a completely clear housing to choose from, the so-called Water Clear, then slightly diffused (milky, diffused), or even coloured or coloured diffused, when the case itself is in the colour of the LED. 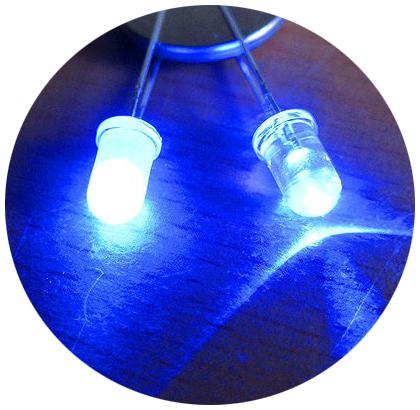 The diffuse package has the advantage that we do not see the LED chip itself and the entire surface of the LED appears to be lit. At the same time, such a LED has a slightly wider beam angle, with the same housing shape. Also with two-colour or RGB LEDs, the diffusion housing of THT LEDs is clearly a better choice, as the colour mixes much better in them.

On the other hand, a LED with transparent housing is seemingly brighter. For example, for applications placed in direct sunlight, a clear case may be a better choice, as the diffuse case appears white when illuminated by the sun or another strong light source, which significantly reduces the contrast between the ON and OFF LEDs.

Various light guides offer an elegant way to get light from the SMT LED on the front panel of the device. The great advantage of light guides is that they are available in different sizes (i.e. what we see on the front panel of the device). At the same time, the big fields ("clusters") of light guides are available, e.g. 1x12 or 3x10 etc., so with the help of several small SMT LEDs we can create a custom indicator that would be practically unfeasible from THT LED due to spatial reasons.

There is a huge number of light guides on the market. We will be glad to help you with the selection and provide any light guide directly from leading manufacturers. 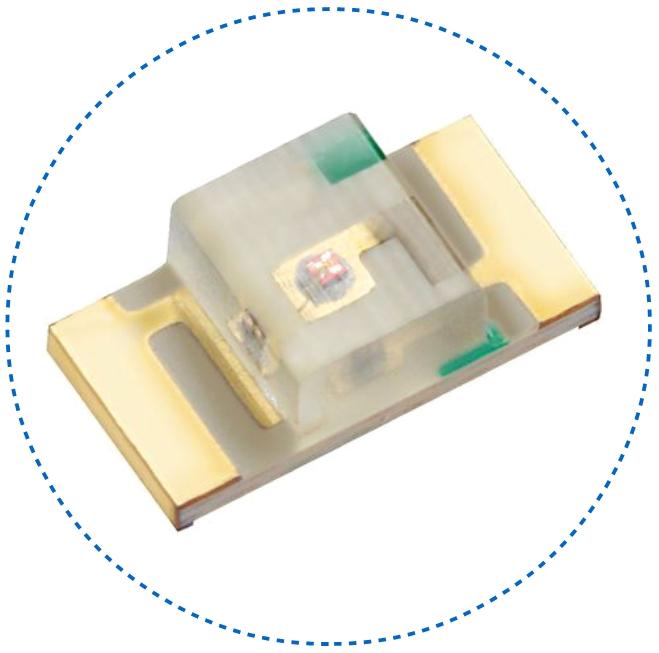 In addition to standard SMT packages, we can also find a seemingly standard SMT LED, but in reality, it is a "reverse" LED. It is designed for soldering to the back of the PCB, and the light passes through a cut-out on the board towards the front of the PCB.

One of the advantages of the reverse LED is that its body is largely embedded in the PCB with a cut-out and thus does not protrude in any way to the other side of the PCB. For example, it is an ideal solution for extra thin devices, where we only place the components on one side of the PCB. We wrote about it more detail in the article ... Do you know LEDs with zero height?

The rectangular LED shines along the PCB and is therefore ideal for applications where we need to get the light "sideways".

Although the LED is a relatively simple discrete component, we also recommend following the basic rules for assembly, PCB design, as well as the handling of the, LED itself.

Another rule is that LEDs are usually ESD sensitive components, so we should follow all the principles for an antistatic workplace.

With SMT LEDs, the shape of the solder pads is essential to maintain a stable position of the LED during reflow soldering. The size of the pads is also important, for example, for cooling the more powerful LEDs.

All-important rules are clearly summarized in the document directly from the manufacturer – Kingbright technical notes.

The service life, aka luminosity depending on the operating time, is usually stated in tens of thousands of hours. This value indicates the time after which the brightness of a given LED drops to 50% of the original value, under certain defined conditions.

In general, however, the LED will continue to function also after this time, only its brightness will be significantly lower. 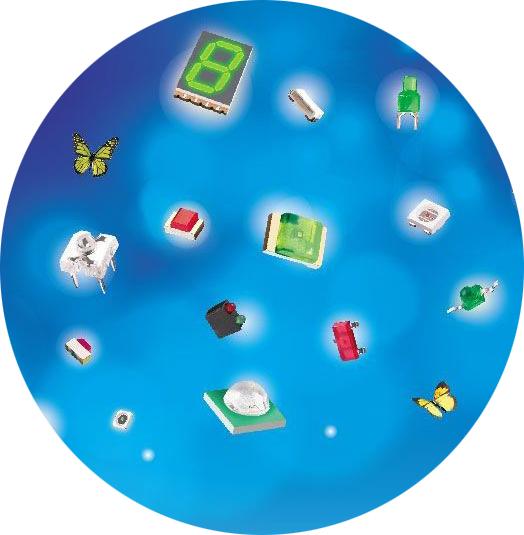 We have summarized the most important criteria to help you find your way around the wide range of LEDs on the market. In practice, we will encounter many other criteria depending on specific applications, but we will write about it in the next article.

Our assortment includes a wide range of standard, flashing, high-power, but also ultraviolet and infrared LEDs. Also, resistor LEDs, LED strips and light bulbs and a wide range of accessories such as sockets, light guides and other complementary products to LEDs from various manufacturers.

Please choose the LEDs from our stock range or send us your request.

If you need further information on LEDs, we will be glad to advise you at sales@soselectronic.com

Date of publishing 12/03/2020.
When you issue article on your website, please give its source: https://www.soselectronic.com/articles/kingbright/essential-criteria-to-help-you-choose-the-right-led-for-your-device-2500

Have you ever verified the authenticity of banknotes in your wallet?

We ship the goods with the following carriers
You can pay using these payment methods
We accept payment by credit cards
© SOS electronic s.r.o. 1991-2022 | Created by © bart.sk
Favorites
Sign in