Mistakes you probably also make when working with LED

Do you know what is allowed or rather forbidden when working with and assembling LED components? Avoid basic mistakes and increase the reliability, and longevity of your device and also save your time and overall equipment costs. (reading for 8 minutes)

The use of LEDs and other optoelectronic components in devices is nowadays a matter of course. However, safe manipulation and assembling of LEDs should be as important as the reliability and durability of the components themselves.

LED (Light Emitting Diode), whether leaded (THT LED) or surface mounted (SMD LED), is quite a sensitive component. Therefore, all leading LED manufacturers publish their recommendations for safe handling in the form of so-called "Technical notes" and similar documents.

The most common LED handling mistakes are:

“Failure to follow the manufacturer's recommended guidelines will shorten the life of the LED and, in extreme cases, may cause the LED to fail completely. And it doesn't need to be a failure after a certain period of time in a functional device, but also already during the finalization - when installing or reviving a new product. Subsequent repairs are very time-consuming and costly and can be easily prevented. Moreover, damages caused by non-compliance with the recommendations cannot be the subject of a complaint, “says Martin Brestovič, product specialist from SOS electronic.

The following overview thus summarizes some basic factors that have a major impact on the reliable and long-term operation of your device when using LEDs in the application.

When storing LEDs, it is important to keep the ambient temperature and humidity under control. By maintaining the recommended environmental conditions, you will prevent damage to the LED diode during soldering, as the accumulated moisture can mechanically damage it when heated rapidly.

The storage of LEDs and, in general, other electronic components in an environment in which aggressive gasses may occur is completely excluded. Acid fumes can damage the LED components themselves as well as oxidize their solder pads. The result of the storage in the wrong conditions is usually the poor solderability of LED components.

SMD LEDs are especially sensitive to air humidity. Therefore, it is necessary to store them exactly as per the manufacturer's instructions - i.e., in most cases in a sealed package together with a desiccator and a humidity indicator. It is important to know which sensitivity class the given LED belongs to. This information can be found in its datasheet.

The moisture sensitivity category is referred to as the MSL (Moisture Sensitivity Level) and ranges from 1 to 6, with 1 corresponding to the least sensitive category. 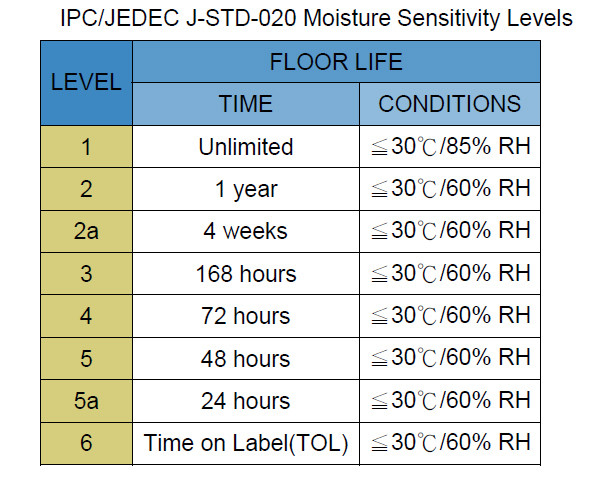 If we exceed any of the parameters (time, temperature, or humidity), it is necessary to “reBake” the LED before mounting, resp. dry according to the following table.

However, even with this process, it is necessary to adhere to the recommended times and temperatures, otherwise, you cannot file a complaint on LEDs.

LEDs with leads are also partially sensitive to air humidity and when stored in an open package for more than 72 hours, it is recommended to dry them for about 30 hours at a temperature of 85 - 100 °C.

"If your application requires the shaping of LED component leads, be aware of one key fact. When shaping the leads, you should avoid transferring the pressure to the LED housing, as well as the LED chip itself. Even short-term increased mechanical stress can result in tearing off fine contacts to the chip LED itself, and thus cause a complete failure of the LED,” continues Martin Brestovič.

In practice, this can be easily achieved by supporting the leads in the upper part (at the housing) by, for example, using tweezers or another suitable mechanical device. The rule to minimize the pressure on the housing applies to any manipulation with the LED, either manual or machine. 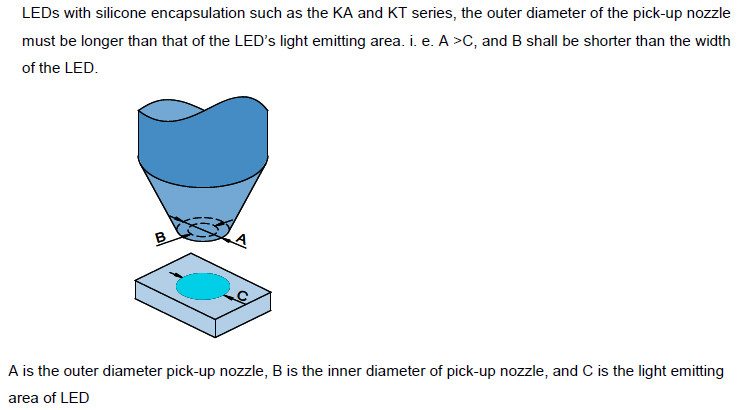 Electronic components, including LEDs, are prone to damage due to low voltage ESD (Electrostatic Discharge) events. Even a discharge of less than 10 volts can cause significant damage, and according to international research, about 70% of damage to electronic devices is caused by insufficient operator protection.

According to international standards, including EN 61340, the main element of ESD protection is ESD clothing. However, also other antistatic devices and aids, such as ESD tools and various accessories, reduce the risks associated with electrostatic discharges.

ESD protection is a relatively broad topic and in the case of LED components, we can find all the important information e.g., in the “Technical notes” leaflet from Kingbright. LEDs based on InGaN and GaN (Indium-Gallium-Nitride) technology are particularly sensitive to damage from electrostatic discharge.

It is an interesting and well-known fact that to prevent damage to electronic components by ESD discharge, it is good to avoid extremely low air humidity in production areas. The ideal humidity in such an environment is 40 - 60% RH.

If we solder SMD components manually, e.g., during the production of the prototype, the tip temperature should not exceed 350°C / 3sec at a joint distance of at least 2 mm from the housing. Please note that for blue, white, and bright green (525nm) types, some sources recommend a tip temperature of only 280°C - especially when manually soldering SMD LEDs in prototypes.

The temperature profile for the reflow process can usually be found in the datasheet of a specific LED. For a lead-free process, the cut-off temperature is usually 260°C for a maximum of 10 seconds. 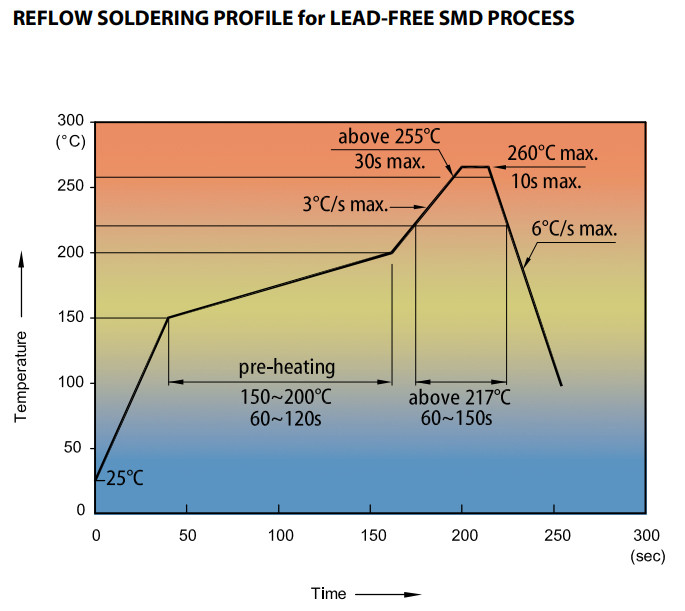 You can read more about soldering in our article "How to solder: Practical tips for quality and efficient soldering“.

Gentle cleaning agents can be found also in our range. For example, Kontakt IPA in a standard 200ml spray package or a convenient 5l package.

LEDs, like almost every diode, are characterized by only a small change in voltage depending on the current.

Therefore, we design the LED power supply circuit only as a current source, in the simplest case using a resistor in series.

It is also suitable to avoid parallel connection of LEDs with one common resistor, as LEDs never have exactly the same voltage in the forward direction Vf (forward voltage) at the same current. This can cause a current overload of LEDs with the lowest Vf, where the increased current tries to "compensate" the Vf to the same level as the other LEDs connected in parallel.

Some LEDs also have a load capacity in the so-called pulse mode mentioned in the technical sheet, when it is possible for a defined time (usually tens of ms) to supply LEDs with a significantly higher current than standard. 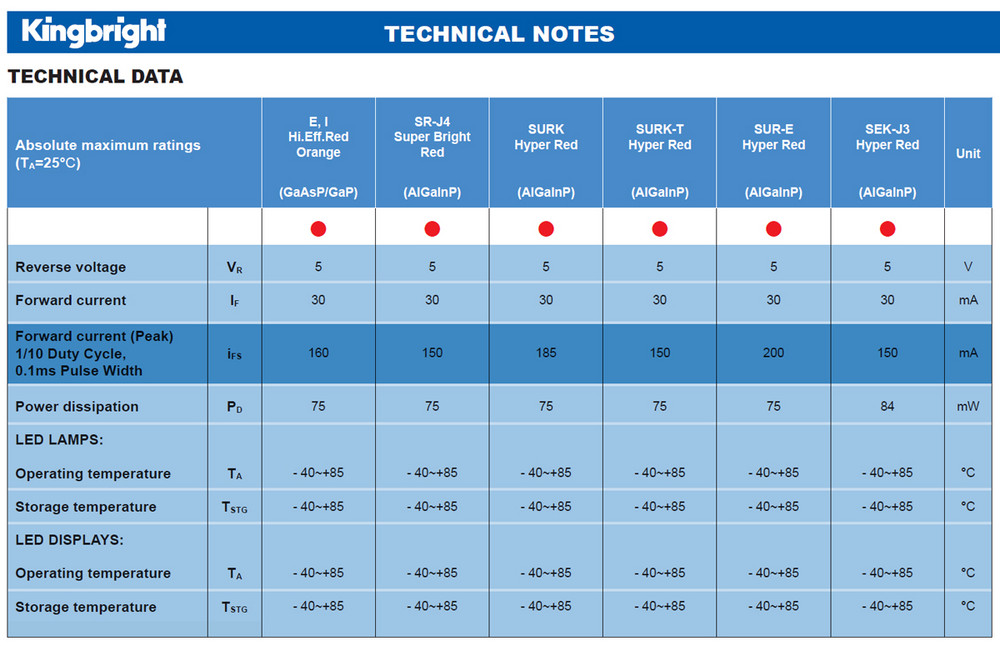 For each SMD LED, we usually find the recommended solder pad design in the datasheet.

An experienced designer can of course use another shape, for example, for high-power LEDs, a sufficiently large copper area helps to dissipate heat. However, it is usually necessary to appropriately select the boundary of the soldered area using a solder resist mask to prevent unpredictable LED shifts during the reflow process. 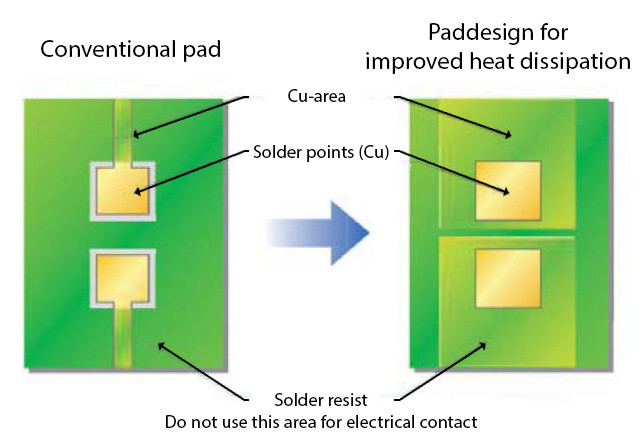 "As I already mentioned at the beginning, LEDs are sensitive components that require proper manipulation during handling and installation. Maybe I helped you find some of the mistakes and also a solution for them. If you have experience with LEDs and you also know of other serious errors in their handling that may jeopardize development and production, let us know about them. And also check out the wide range of LEDs on our website for your other projects,” says Martin Brestovič, product specialist from SOS electronic.

For more technical information about the products in the LED assortment, please visit our webpage. If you have any questions, we will be happy to advise you at sales@soselectronic.com.

Date of publishing 06/27/2022.
When you issue article on your website, please give its source: https://www.soselectronic.com/articles/kingbright/mistakes-you-probably-also-make-when-working-with-led-2792

Have you ever verified the authenticity of banknotes in your wallet?

We ship the goods with the following carriers
You can pay using these payment methods
We accept payment by credit cards
© SOS electronic s.r.o. 1991-2022 | Created by © bart.sk
Favorites
Sign in