Are your devices protected from lightning and overvoltages?

If you have a lightning conductor on your building, it doesn´t mean your devices are on a safe side. We´ll tell you why ...

This is an archive article published 01/22/2015. Some information may no longer be up to date and in line with the current state. Please contact us in case of interest.

1) overvoltage (surge) can arrive anytime (and it comes) by a mains line from outside. Sources of surges in mains line are (distant) flashes and also various motors, switched inductive loads and other.

2) a discharge at lightning hit is able to induce voltage even to distant conductors and also to significantly increase voltage on a PE(+N) conductor. Current in orders of kA flowing to earth creates up to kV voltages (R*I) even on high quality earthing. This voltages will get through an equipotential point in a distribution box to practically all PE+N conductors (in the most common TN-C-S network). In praxis it means, that if you don´t have a suitable surge protection installed (SPD), then all mains sockets connected to given distribution box will be exposed to this high voltage. A portion of a discharge usually flows also through incoming PE conductor (from a building to a mains line) and also through all equipotentially conducted media (water, gas, heating, air conditioning, …). This also contributes spreading a high voltage into various places in a building.

That´s why various components for elimination of surges (SPDs) are available on the market. Majority of flashes and following surges is usually quite short - units to tens of microseconds, that´s why even surges in a mains line are “manageable”. The most common goal of every SPD component is to equalize potential (against earth or at least among given conductors). At a direct lightning hit, it´s us usually impossible to avoid status when for example all the installation has 1000V to earth, but it doesn´t have to be fatal for our devices - it´s only essential, that all conductors had more-less the same potential in a given moment.. 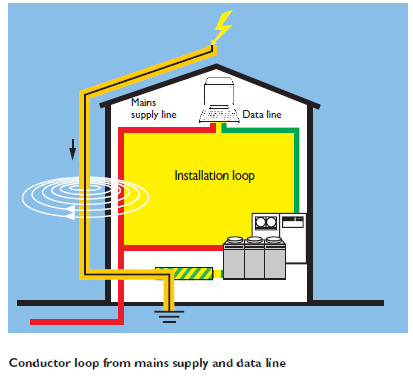 Type 1 - „rough“ protection. Usually installed outside a building or into the first distribution box inside a building. It is usually based on usage of a surge arrester (gas filled) spark gap. This SPD is able to eliminate high energy amount thanks to a small voltage on a component during its action. However only this protection is not enough, because a spark gap is slow and at high dV/dT it starts to act at quite high voltage. Advantageous is its small capacity and very low leakage current.

Type 2 - is the most common protection used in distribution boxes, Usually it´s based on a varistor (with a thermal fuse). This protection is faster and represents sufficient solution for majority of cases (ideally in combination type 1 + type 2). Disadvantage is that a varistor has certain capacity, that´s why it can cause problems if installed behind a residual current circuit breaker (RCCB) - because of a leakage current (L-PE). For these cases, combined SPDs with varistor and spark gap in series are available.

Type 3 - fine protection. Usually based on a varistor, or also in combination with a transil (suppressor diode). This protection is required for sensitive devices with microprocessors, computers and other “fine” equipment. It has the biggest effect if installed near a protected device or directly in a given socket. 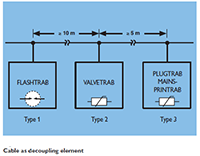 In praxis it´s good to reach some length of a cable among particular SPD stages, which acts as an inductor thus limiting a speed of voltage rising. . If it isn´t possible, then external inductors are used, often integrated into combined SPD components (for example type 1+ type 2 in one unit).

Company Phoenix-Contact offers comprehensive and sophisticated system of SPD components under name Trabtech. In a Surge protection user guide can be found a short overview of most often used components and examples of usage. An important fact at Phoenix-Contact SPD components (Flashtrab, Valvetrab,...) is, that they have exchangeable elements, i.e. in case of damage, only a varistor portion itself can be exchanged. Choice of a suitable component is important, even in respect to a type of a network which you have in a building. Very important is also its placing in a distribution box, so that (L-PE) conductors were as short as possible and sufficiently thick and not to create a loop around other conductors.
Closer about this problematic can be found in the document Phoenix Contact Fundamentals for Surge Protection.
In case of interest in any SPD component from Phoenix Contact, please contact us at info@soselectronic.com.

Date of publishing 01/22/2015.
When you issue article on your website, please give its source: https://www.soselectronic.com/articles/phoenix-contact/phoenix-contact-are-your-devices-protected-from-lightning-and-overvoltages-1655

Ord. No.: 166801
Manufacturer: PHOENIX CONTACT
ORDER:
You already have 0 pcs in your cart
You already have 0 pcs in your price offer request
You ordered already: 0 pcs
Price offer was created for this product
Get Quote
We ship the goods with the following carriers
You can pay using these payment methods
We accept payment by credit cards
© SOS electronic s.r.o. 1991-2022 | Created by © bart.sk
Favorites
Sign in